William F. Buckley, Jr. once quipped, "I'd rather entrust the government of the United States to the first 400 people listed in the Boston telephone directory than to the faculty of Harvard University." Given that Congress currently has an approval rating of a mere 14% (76% disapprove!), we can bet Mr. Buckley would prefer those 400 Bostonians to the current Congress as well. I know I would. I don't think I could feel less represented by our representatives than I do now.

Even if the system were working well, either a large minority or even a majority of people still wouldn't be well represented. If, for example, you're a Democrat living in a majority Republican district, it's very possible that you'll go your whole life without having a representative that has views similar to yours. The same goes, of course, for a Republican in a majority Democrat district.

So I think we should adopt a variant of Buckley's approach.

Instead of the first 400 names in the phone, let's have our representatives be chosen at random from the adult population. The selection process would be sort of like jury duty for a very long trial.

There are some details to be worked out, but I think it could be quite straight-forward. I would propose something like four-year terms with one-quarter of the representatives cycled in and out each year. I believe that we would want more representatives, perhaps five times as many, to provide better representation of a wider cross section of the population.

This approach has a huge number of advantages. No more disruptive and divisive elections for representatives. No more election fraud. Since there are no more campaigns to fund, it weakens the lobbyist and big money connections to the representatives. Representatives will have less conflict of interest between their career and representing their constituents since after their four-year term, it's time to go back home. More people will have a representative that reflects their beliefs, even those who are of minority political persuasions in their district. A wider range of skills from far more professions will be available when debating legislation: scientists, doctors, engineers, economists, etc.

Are there any downsides? I don't think so. At first I was thinking that there might be to many undesirable representatives, but given the crazy (Pelosi), stupid (Boxer), and unscrupulous (Dodd) politicians we have now, I don't think we'd do much worse. It would clearly be disruptive for those chosen to be representatives, but I'm sure insurance companies would come up with products to help them.

To start, I would only do this for the House of Representatives. I would keep everything else (Senate, etc.) the same.

In numerous old legends, prior to two armies engaging in battle, the two kings or a champion for each king would first fight in single combat. Based on the result of that combat between the two individuals, one side might retreat or otherwise sue for peace. An example of such a legend is the biblical story of David and Goliath, where David, who was essentially an unarmed child, slew Goliath, the largest, most powerful, and most skilled of the Philistine warriors. The Philistines were so freaked out by this turn of events that they beat a hasty retreat.

From one perspective, an election is similar to a single combat preceding such a battle. The basis is, of course, somewhat different. In this case, it's assumed that the larger army would win. The votes are counted, the "larger army" is identified, and the minority begrudgingly "surrenders" and allows the representative(s) from the "larger army" to rule them for a while. This approach is obviously less costly than having a total war every 4 years.

If any of these implicit and explicit bounds on ruling are breached by the majority, the minority may be better off resorting to violence or any other approach that can make the lives and/or the lives of their families and communities better. Note that revenge is a significant component of making lives seem better.

With the passage of Obamacare, there are a significant number of angry people. There are claims of violence and threats of violence by those who oppose Obamacare against those who supported and passed it. This is not surprising and fits the above narrative perfectly. It's an inherently subjective analysis for each member of the minority to determine whether or not the majority has exceeded its bounds, so some people will be ready to resort to violence and subversion before others. Assuming the claims of threats and violence are substantiated and significant (a handful of such incidents is meaningless), we may be seeing the beginning of the minority moving towards violent confrontation.

There are many who are calling on Republicans/Conservatives/Libertarians to condemn the threats and violence.

Nobody has ever been able to answer that question and stick to that answer with further questioning. Oh sure, some have said, "because who could afford to hire anybody for $1,000 per hour?" So, then I ask, "how about $500? No? $100? No? $50? No? $40? No? ... $10 ...". Somewhere in this string they promptly either change the subject, create and knock down straw men, get irate and insist that my questions are absurd and have no merit, or otherwise indicate through their behavior and speech that they know perfectly well that some people who are employable at a lower wage are never going to find work at $7.25 per hour.

In other words, pretty much everybody knows that minimum wage laws don't help the poor. In fact, they are currently devastating the young poor: 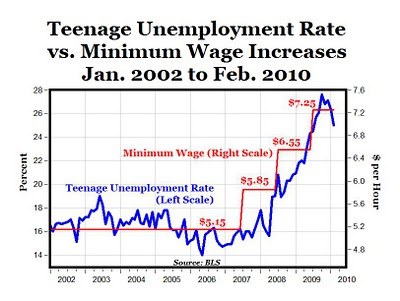 Obviously, I think that minimum wage laws are really a bad idea. However, it has now crossed the line, in my opinion, into severely immoral. The government is now telling a large class of people that they are not allowed to legally work. These people, who can't find jobs, are going to be adversely impacted their whole lives because they are unable to gain experience that would've helped them find better jobs later.
Posted by Bret at 3/18/2010 06:14:00 AM 18 comments: 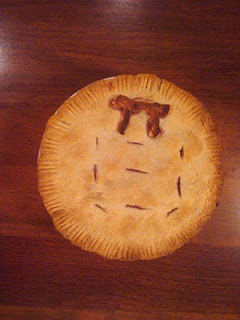 My older daughter (13) was aghast that it was Pi Day (3/14) and she didn't have any pie (she's eaten pie every Pi Day for the last few years). So she scoured the pantry and found enough ingredients to make her first pie (blackberry), pictured above.