Give Me a Hand


With two partners, I founded Vision Robotics Corporation over 15 years ago. While very small, we're one of the oldest firms in the world that focuses strictly on machine vision based robotics.

We've seen a great deal of change in those 15+ years.

By far the biggest change is that computers can do more than 10,000 times as much processing per dollar as they could when we founded the company. That means that many of the algorithms and methods for using the information from image sensors that were impossible or extremely hard back then are child's play (for a really smart child!) now. It means that we've gone from vision systems that were vastly inferior to human capabilities to vision systems that often surpass humans' abilities to see and do something with what they see. For example, on our robotics lettuce thinner, the images are streaming by so fast that no human would have any chance of keeping up. Soon, $1,000 worth of parts will build a vision system that surpasses human visual capabilities in nearly every way.

In many other areas, machine intelligence is rapidly catching up to humans. Voice processing such as Apple's Siri may still seem primitive, but consider how far it's come in only a few years and project that forward ten years into the future. Computers will be conversational on most common topics by then.

In fact, in about ten years, $1,000 worth of computer hardware, in real time, will be able to perform as many computations as a human brain. The following graph is taken from an ancient post of mine, and we're still right on track to catch up with human computational capability. 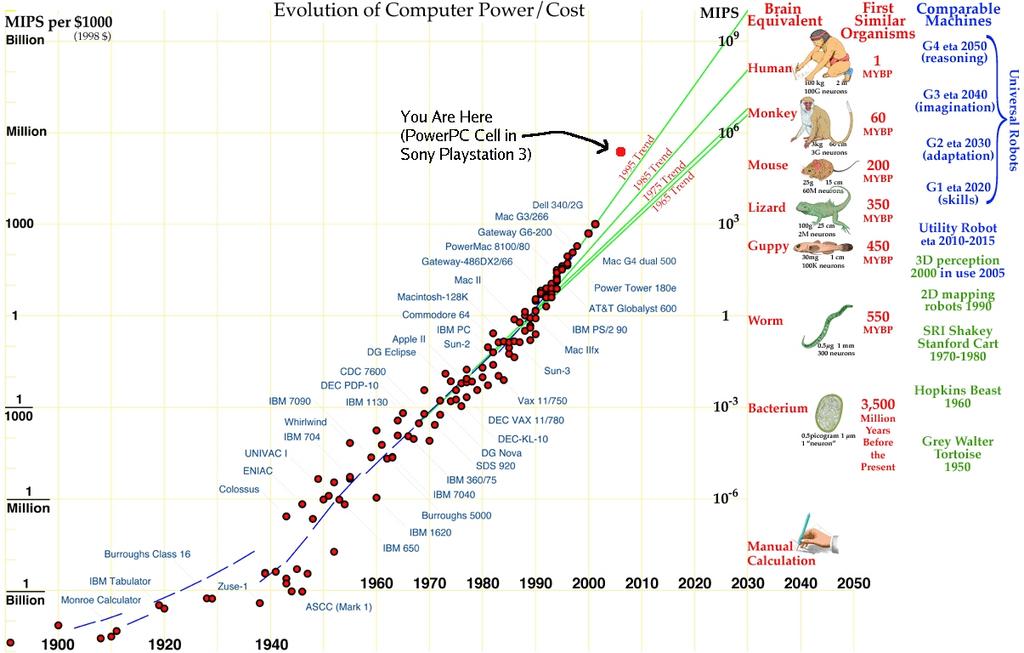 Of course, human computational capability and human intelligence are two very different things. But the latter is probably not possible without the former.

The bottom line is that intelligence is hardly the limiting factor and will most likely not be any factor at all in another decade or two when it comes to automation.

The human hand is an amazing tool. Nearly uncountable degrees of freedom. Tremendous flexibility. Incredible strength, especially given its relatively puny size. Amazing endurance. Stunningly large mean-time-between-failures. Essentially maintenance free and self-repairing. Well, maybe not maintenance free since the body it's attached to does need things like food and potty breaks. But still...

If someone could build me an end effector with the characteristics of a human hand for $1,000 or even $10,000, there would be many trillions of dollars worth of robotic and automation applications that would be instantly addressable.

If you want to have unlimited wealth, invent something as effective as the human hand.

Here's a video of a talk I gave not too long ago in which I made this point (towards the end). It's long, so I won't hold it against you if you choose not to watch it. :-)

Email ThisBlogThis!Share to TwitterShare to FacebookShare to Pinterest
Labels: Technology

Lately human hands have been very much on my mind as mine are getting pretty much useless as precise instruments -- to wit the many typos in these comments.

I have come to appreciate what they still can do and try to follow the experts' advice by exercising, massaging and otherwise cherishing them so they'll go the distance with me.

I wonder if in the future, people will replace them as easily as I was able to replace my old worn out knee with a wonderful new titanium one?

Right, I'll go out and do that as soon as I finish mowing the lawn.

You know what else cheap computing might do? It might make information about prices available everywhere to everybody at the same time. And where would your markets go then?

My wife made me retire but I was going to have to do so soon anyway. My fingers are too stiff to take legible notes any more. I tried a number of voice recognition programs, but they didn't suit me.

This morning, one of my most tech savvy friends posted a FB joke about Windows 8. Y'know, as long as a company with the resources of Microsoft can be stupid enough to develop and emit W8, I think claims about the potential of computers to change things for the better are overblown.

Harry, I'm told when you get old, your memory starts to fail, but surely in lucid moments you can remember before computers and cell phones and All-in-One printers and Wi-Fi and ... when you didn't have the world at your fingertips or at the end of your stylus. I understand some old parties need to resort to them instead of their fingers on touch screens.

It was the pits.

Now, I understand when I get old and my in-body brain takes a break, I'll be able to consult my auxiliary brain conveniently located in any of the half dozen devices on hand, so I can avoid comparing apples and oranges or Windows 8 and robots.

I really like your presentation - nice amount of substance and levity.

A little observation about perceptions of technology and change: In many cases new technologies can not live up to the hype in the short term (a few years) but sometimes they exceed expectations in the longer term (10,20, 30 years). People take the change for granted but a little reflection elicits a sense of amazement.

Yes, because for the short term, these sorts of exponential trends looks linear or even flat.

Young people think the world began when they were born and can't imagine when things weren't as convenient as now.

A small thing like credit cards. Prior to the late 60's early 70's (yesterday in my world) people needed to carry cash or travelers' checks and freguently had to find a bank to cash them because local merchants didn't want to be bothered ...

When traveling abroad, it often meant a trip to the American Express office, not a problem in Paris, but a big one in Moose Jaw (yep, Peter, we were there and had a wonderful meal prepared by a master French chef). Who'da thunk it. The owners of the small hotel and restaurant where we stayed took our personal check on a New York City bank no less and when we got back home, I wrote a nice thank you note for the lovely visit and they wrote back and we exchanged notes for many years until ...

I was telling a young friend (30ish) about the trip we took to the Canadian Rockies and how fabulous it was except for the trouble we had getting money. She was stunned and thought I was kidding around with her.

Even forgetting traveler's checks, imagine the trauma it would cause if one had leave one's car and open the garage door manually? I'd need strong psychotropic medication to even contemplate the horror and living without a nuke-atorium -- unthinkable.

Bret, I hadn't ever really thought about how difficult hands are to mechanize, and they probably aren't a patch on perhaps the most versatile end effector out there: an elephant trunk.

BTW, I think your chart is a bit brave in 10^9 MIPS as "Brain Equivalent". Since we have no idea how the brain works, not only do we not know how many MIPS brains execute, we don't even know if how it does what it does relies at all on anything like discreet instructions (never mind being a binary state machine).

[Harry:] You know what else cheap computing might do? It might make information about prices available everywhere to everybody at the same time. And where would your markets go then?

For some things -- airline tickets, hotel rooms, rental cars -- that is pretty much the case. Where have those markets gone?

erp, the mind boggles. And I can remember all that stuff.


I think that in a world where 96% of men are crazy about football but only about 0.00001% play handball, you are swimming upstream.

Time is also not your friend. The genes that code for forelimbs with several (most often 5) digits are over 400 million years old. If you think of evolution as a kind of haphazard R&D program, it's reeaaal slow.

Some years ago, I interviewed an orthopedic surgeon, who told me she didn't do hands and considered very few surgeons capable of doing it: the intricacy and compactness make it difficult.

A robotic hand may be quite a bit bigger than ours.

... that may be true using today's technology, but we don't know what's around the corner.

However, other than pain if I try to do something intricate or pick up something heavy, it hasn't changed my life, but in the bad old days, I wouldn't be able to live without assistance because doing routine domestic chores like making butter, kneading bread, milking cows, etc. would have been out of the question.

Luckily back when, few people lived to tell the tale of their woes with their 80+ year old brains and bodies.

Just to be clear, while we have no idea how the WHOLE brain works, how parts of it work is well known. For example, the pre-processing done by the visual cortex. The way Moravec got those numbers is to consider the grams of brain material required by the human and mammalian brains to do that processing and compare it to the computer power required to do that same processing in real-time. Then, he assumes that the rest of the brain is more or less comparable, leaving a straightforward calculation to translate between a brain (cortex) of a certain weight and processing power.

Even if he's off by a couple orders of magnitude, unless the exponential trends stall out soon, we'll still see $1,000 worth of computing power have the same processing power as a human brain within a few decades.

Unless, of course, the brain does quantum computing.