Well, you asked for it Mr. President

Every president inherits the consequences of policies and events from their predecessor. Most people know that and remember to cut a new president some slack. Continuing to blame a prior executive for problems 6 or 12 months beyond assuming office is juvenile and unseemly. It depletes any sense of goodwill afforded by the opposition.

Well, there you go again:

The same thing that swept Scott Brown into office swept me into office.

When Obama announced that he would travel to Massachusetts to campaign for Coakley against Scott Brown, her probability of winning the election according to Intrade's prediction markets plunged from 80% to 40% in the approximately 48 hours following the announcement. I'm sure it's just a coincidence. Surely Obama's presence could only help?
Posted by Bret at 1/17/2010 07:49:00 PM 15 comments:

Wrongheaded even before the drift

In response to a comment to the previous post, presenting a David Hogberg review of the latest book by Thomas Sowell:

With his new work, Intellectuals and Society, Sowell has finally made good on his 20-year-old promise to write about intellectuals. He has also made good on his threat. Sowell takes aim at the class of people who influence our public debate, institutions, and policy. Few of Sowell’s targets are left standing at the end, and those who are stagger back to their corner, bloody and bruised.

Sowell defines intellectuals as an occupation, as people whose “work begins and ends with ideas.” This includes academics, especially those in the humanities and social sciences, policy wonks, and, to a certain extent, journalists. This distinguishes them from occupations in which the work begins with ideas and ends with the application of ideas. Physicians or engineers usually start with ideas about how to approach their work, but eventually they have to put them into practice by treating patients or constructing bridges.

As a result, intellectuals are free from one of the most rigorous constraints facing other occupations: external standards. An engineer will ultimately be judged on whether the structures he designs hold up, a businessman on whether he makes money, and so on. By contrast, the ultimate test of an intellectual’s ideas is whether other intellectuals “find those ideas interesting, original, persuasive, elegant, or ingenious. There is no external test.”

An intellectual’s reputation, then, depends not on whether his ideas are verifiable but on the plaudits of his fellow intellectuals.

Intellectuals, of course, have expertise — highly specialized knowledge of a particular subject. The problem, according to Sowell, is that they think their superior knowledge in one area means they have superior knowledge in most other areas. Yet knowledge is so vast and dispersed that it is doubtful that any one person has even 1 percent of the knowledge available. Even the brightest intellectuals cannot possibly know all the needs, wants, and preferences of millions of people. Unfortunately, they have considerable incentive to behave as if they do.

Reinforcing these incentives is what Sowell dubs the “Vision of the Anointed.” Intellectuals’ belief in their own superior knowledge and virtue leads to a belief that they are an anointed elite who are qualified to make decisions for the rest of us in order to lead humanity to a better life. Under this vision problems such as poverty, injustice, and war are not due to inherent human weaknesses, but are the products of society’s institutions. Solving those problems requires changing those institutions, which requires changing the ideas behind the institutions. And who is better suited for that task than those whose work begins and ends with ideas?

“There could hardly be a set of incentives and constraints more conducive to getting people of great intellect to say sweeping, reckless or even foolish things,” Sowell states. He warns that if “no one has even 1 percent of the knowledge currently available . . . the imposition from the top down of the notions favored by the elites, convinced of their own superior knowledge and virtue, is a formula for disaster.”

The most telling portions of Intellectuals and Society are the ones in which Sowell chronicles the disasters that occur when intellectuals succeed in getting politicians, judges, and other policymakers to impose their vision on society.

Sowell writes that it “was part of a long-standing assumption among many intellectuals . . . that it is the role of third parties to bring meaning into the lives of the masses.”

Sowell also emphasizes the fact that intellectuals take their beliefs as axiomatic truths rather than hypotheses to be tested.

Since the 1980s, conservatives and libertarians have pushed back to the point that intellectuals’ “overwhelming dominance has been reduced somewhat.” Yet he warns that the intellectuals’ vision is still dominant: “Not since the days of the divine right of kings has there been such a presumption of a right to direct others and constrain their decisions, largely through expanded powers of government.” But now that Sowell has given us a penetrating analysis of that vision, perhaps it will be easier to fight it.

The intellectual elites have always lived in their own bubble of ideas, quite apart from the rest of us. That bubble has been drifting away quite rapidly and looks set to continue to do so. 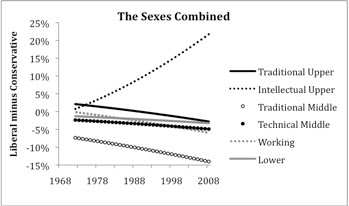 The above graph, courtesy of Charles Murray, shows political attitudes from the General Social Survey of non-Latino whites ages 30–49 in the survey year. What it shows quite clearly is that while most of the country (at least the white part) is mildly trending towards being more conservative, the "intellectual uppers" are heading off the charts on the liberal end (for more details on the chart visit Murray's post).

This ties in well with a recent New York Times column by David Brooks where he whines that, "Every single idea associated with the educated class has grown more unpopular over the past year." Perhaps that's because the "educated class" (or "intellectual uppers") have ideas that are so far removed from the reality that the rest of us experience that those ideas simply don't make any sense to us commoners anymore.
Posted by Bret at 1/06/2010 09:11:00 PM 32 comments:

The Foundation of the Blue State Blues

Some Blue States, like California (my home State), are really hurting. Not only do they face never ending fiscal crises, but people, especially people in their most productive years, are starting to leave these States in droves.

California was once a really great place to live. It had (and still has) great weather, beautiful terrain, and bountiful natural resources.

The typical conservative explanation is that all this wealth attracted leaching liberals who took over the government and taxed and regulated the State from prosperity into its current mess.

There may be a grain of truth to that, but the question is why did everybody else (besides the leaching liberals) let this happen. The answer, in my opinion, is that changes in Federal Tax law deserves a substantial part of the blame.

From FDR's administration until after Reagan was elected, the top Federal Tax Rates were always above 70% and even exceeded 90% at points. But State Income tax was deductible. During that period, in those States with a preponderance of high income earners, both the earners and the rest of the State could benefit from instituting high State income tax rates for the high income earners and returning part of those taxes as services.

To illustrate, let's consider an example. Let's say your marginal Federal Tax rate is 90%. Then for each dollar the State taxes and receives from you (which you then deduct from your Federal taxable income), your total income tax bill (State plus Federal) rises only 10 cents. The State then provides 15 or 20 cents in services to you, a bit goes to help the poor in your State, and the rest is pocketed by the bureaucrats and lobbyists. Everybody wins! Well, everybody but the poor and middle class in all States who have to pay more to provide the revenue needed by the Federal government.

California leveraged that situation wonderfully well. They built great infrastructure (like the University of California), provided great services and funded fabulous levels of graft and corruption. Everybody assumed this gravy train would run forever.

However, two things happened that ended the free ride fairly abruptly. Federal income taxes were slashed by Reagan and the Alternate Minimum Tax (AMT) scheme was instituted which greatly reduced the ability to deduct State income tax. Suddenly paying State income taxes was a big net negative for the taxpayer. A dollar of revenue to the State was pretty much a dollar out of the pocket of the high income taxpayer.

Suddenly the services to the high income tax payers couldn't possibly make it worth it to pay the tax (that's why high income earners are leaving in droves), the programs for the poor couldn't be lavishly funded, infrastructure couldn't be maintained, and, worst of all, the fabulous levels of graft and corruption to which so many people had become so addicted could only be maintained by massive and unsustainable borrowing. Since graft and corruption are the lifeblood of politicians and lobbyists, the massive and unsustainable borrowing is a given.

This is simply a case of people responding to incentives created beyond their control. Unfortunately, bureaucracies can generally only expand, so it can't really be undone at this point until the Blue States go hopelessly bankrupt. It's a bit like a Roach Motel - or for my State, "Welcome to the Hotel California."
Posted by Bret at 1/04/2010 04:48:00 PM 7 comments: