The Politics of the Current Health Care Reform Debate

Opposition to proposed changes to medical care/insurance programs has been growing and getting more and more vocal. Even though most people are at least somewhat satisfied with their circumstances they are willing to consider changes that make sense and don't seem fishy:

Yes, the current health care program does have problems. To fix them requires a series of repairs -- tort reform, portability, elimination of prior conditions as an impediment to insurance, and a safety net for people who don't have insurance or lose their jobs.
Health reform does not require a complete remaking of the system. If all that Obama wanted were to insure those who fall between the cracks, he could put them into the same wonderful program that Congress created for itself by subsidizing their premiums. This would neither require a thousand pages of legislation nor a new series of bureaucracies.
But building a new power base resulting from the mobilization of the political and economic periphery requires redefining the nation's health problems as the nation's health catastrophe.
Health reform is Chicago politics on a national level. Welcome to the city.

Also, when the president talks about competition he seems to mean something different than my notion of competition:

Choice and competition would be good. They would indeed reduce costs. If only the president meant it. Or understood it.

In a free market, a business that is complacent about costs learns that its prices are too high when it sees lower-cost competitors winning over its customers. The market — actually, the consumer — holds businesses accountable and keeps them honest. No "public option" is needed.

So the hope for reducing medical costs indeed lies in competition and choice. Today competition is squelched by government regulation and privilege.

But Obama's so-called reforms would not create real competition and choice. They would prohibit it.

Competition is not a bunch of companies offering the same products and services in the same way. That sterile notion of competition assumes we already know all that there is to know.

Well-meaning politicians have created untold misery by assuming they and their experts know enough already.

The health care bills are perfect examples. If competition is a discovery process, the congressional bills would impose the opposite of competition. They would forbid real choice.

People who would be willing to make changes see all of this and the behavior of the political class and they are getting angry and losing trust:

Americans didn't vote for big government last November. They voted for a guy who looked like he could keep his cool in the heat of battle. If Obama wants to regain that cool, he needs to rein in the power-grabbers in Washington.

Actually they did vote for bigger government without intending to, but that's another subject. Here is how I would describe the growing opposition to any change at this time: they are calling a time-out on the political class until they start behaving in a trustworthy manner.

Many Democrats are upset with the current tone of the Health Care debate. In their opinion, those who oppose Health Care Reform are being noisy, disruptive, and irrational. For example, someone I know wrote the following on another forum I frequent:

"I don't have a problem with rational arguments and debate on these issues. One of my previous posts suggested that Reps [Republicans] choice [sic] to use lies and fear probably guaranteed a poorer final result than the decision for them to present rational arguments and advance the solution in a positive way."

The Health Care debate starts with assumptions about how the world works (for example, what motivates different people) and even more importantly, personal subjective preferences. Rationality and reason have little to do with either of those, especially the latter. Since there is little common ground between liberals and conservatives on these premises, it's no surprise that the conclusions are totally opposite as well.

Just to be clear, both liberals and conservatives want peace on earth, good will to men, prosperity and happiness for all, etc., etc., yadda, yadda. So it might seem like there is substantial common ground, at least regarding the desirability of various Ends.

However, where there is precious little common ground is whether or not it's possible to achieve any of these desirable Ends or anything close. Note that a belief that such Ends are unachievable precludes rational discussion about the path to get there. There often simply isn't one, in my opinion.

My observations of politics coupled with trading futures (which led to a large number of hours studying economics and public choice theory) have completely convinced me that, on average, new and expanded government programs, taxes, and/or regulations hurt me and my family (and others) in the short term and the vast majority of people in the longer term.

As a result, from my point of view, there really isn't any point to "rational" discussion. That's because the rational discussion is inherently limited to those details that can be reasonably foreseen. What can't be rationally discussed is all of the unforeseen problems that will ultimately occur because nobody knows what they'll end up being. The foreseen effects of a 1,000+ page policy are just the tip of the iceberg. It's the huge mass of problems lurking below the surface about which we're currently clueless that will be the real problem and there can't be meaningful debate about that which is unknown by all.

In fact, stooping to rationally debate what's known is counterproductive. It requires a certain level of buy-in to the program that isn't warranted.

This chart says it all: 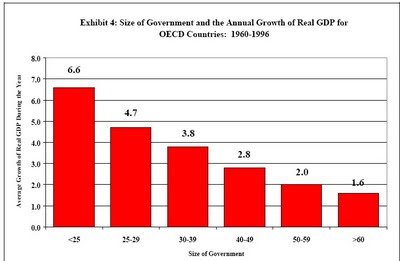