I've posited in the past (and present) that government is inherently immoral. Here is my explanation in response to a facebook post and a comment from someone who supports "social democracy" or "socialism" as the desired political and economic organization for the United States and the world. Note that I put "socialism" in quotes because apparently they don't go by the dictionary definition of socialism where the means of production are owned and/or controlled by the government, but it's unclear exactly what they do mean by socialism.


The following is how I view the political structure of the United States in regards to, say, redistribution. You may completely disagree, but keep in mind that millions of citizens view it like I do.

There are four groups:

A. Voters and their elected representatives
B. Bureaucrats and law enforcement
C. Taxpayers
D. Recipients of the redistribution

In the case of redistribution, the United States is A directing B to take from C and give to D.

The first immoral part is B taking from C. If C is willing or nearly universally willing, this wouldn't be immoral, but that's not how it is in reality. When a substantial part of C is NOT willing, then this step has a lot in common with banditry - C is forced, with ever increasing levels of violence to comply. In political philosophy the government is described by some as a "stationary bandit" for this very reason. Most people consider banditry by non-government entities to be immoral. Since you've noted that our government is just a covenant between private citizens and a ruling entity, group A is basically directing B to be bandits and are accomplices to the banditry. Since banditry is immoral, group A is also immoral. Group D is the recipient of money that has been acquired immorally and that makes them willing participants and also immoral.

Lastly, you'll probably be quick to point out that group C is immoral because they don't volunteer their money to group D or willingly and happily give it to group B to do what they like with it. I agree with that assessment as well. We therefore agree that at least part of group C is immoral. Note that most people consider banditry even against immoral people to be immoral so that doesn't absolve any of the other groups.

Therefore, since we all belong to one or more of these groups, we are all immoral and so is the government.

Again, I know you don't agree with that and find it "laughable." Nonetheless, that is how millions of people view it to some degree so if and when you lose another election, you'll know what us laughable deplorables are thinking and why we vote against people like you and Hillary. You think we're immoral and you're right. We think you're immoral and we're right, in our unshakably strong opinion.

Also again, we believe government to be a necessary immoral evil. Yes, we're all immoral, but there's no choice but to be so. The human animal is simply a nasty, evil, immoral creature and no matter how we organize ourselves, we will still be that. We can be somewhat more moral by limiting the banditry, but we can only limit it so far and maintain a working civilization.

The last point is that when people make the argument that X is immoral, the answer is yes, but so what? Those sorts of arguments hold no water for me since we're all immoral.

I suppose some of group C might be "moral" if they willingly and happily pay their taxes and would do so without enforcement AND they're not part of group B or D AND they vote against candidates that agree with the forcible extraction of taxes from group C. However, I think those folks are basically suicidal because without said forceable extraction of taxes, I doubt civilization would survive for long and without civilization, the vast majority of us are dead in short order.
Posted by Bret at 8/21/2018 11:17:00 AM 20 comments:

You Are Here (Update)

In 2005, I posted about a new PowerPC processor we were starting to use in some of our robots. At processing capability of around 200 billion floating point operations per second (200 GigaFLOPS), it was big news at the time as it put the potential intelligence of our robots into the range of "mouse" instead of lizard as shown by the blue dot in the graph below. 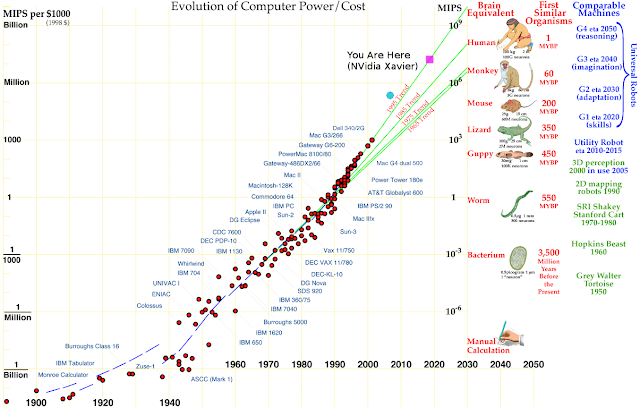 I was thinking about this graph recently with the announcement of NVidia's new Xavier system on a chip computer. With processing capability of 30,000,000,000,000 (30 trillion) operations per second at a price of $1,299, this can be represented by the magenta square labeled "You Are Here" on the above graph. We will have this new processor incorporated into a new product prototype this October, so just like the PowerPC of yesteryear, this is something that's real and used by actual developers as opposed to some theoretical gadget.

A reasonable reaction is, "yeah, sure, whatever, but without the appropriate software, how will this computer be intelligent at all, much less at a monkey or human level?" And that was my first reaction as well, but I've since concluded it was misguided. Just like nobody has to know how a human brain works for it to work just fine, nobody has to know how a neural net within a computer works in order for it to work just fine, and, in fact, that's exactly what's happening, and at a very rapid rate. A number of research groups are trying different structures and computation approaches and are steadily improving the functionality and accuracy of the neural nets without really understanding how they work! It's basically a trial-and-error evolutionary approach.

With this new Xavier processor, using already known neural nets, it will be able to recognize objects in an image with a high degree of accuracy and tell you which pixel belongs to which object 100 times per second. Is that intelligence? Well, when a person does it, we think that's a form of intelligence and since nobody can tell you how the neural net works, I don't think we can say whether or not it's intelligent. If it is intelligent, it's certainly an alien intelligence, but looking at it operate, it looks to me as if it's intelligent.