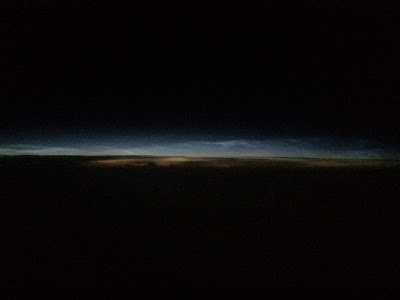 Okay, you could be easily forgiven for wondering what the heck you are looking at.

Early this morning, as in 0300 early, we were en route from Paris to Helsinki, just south of Stockholm at 39,000 feet. At exactly the same time as I was mentally formulating the question, my First Officer asked "Do you know what you are looking at?"

Noctilucent clouds, or night shining clouds, are tenuous cloud-like phenomena in the upper atmosphere of Earth. They consist of ice crystals and are only visible during astronomical twilight. Noctilucent roughly means "night shining" in Latin. They are most often observed during the summer months from latitudes between 50° and 70° north and south of the Equator. They are visible only during local summer months and when the Sun is below the observer's horizon, but while the clouds are still in sunlight. Recent studies suggests that increased atmospheric methane emissions produce additional water vapor once the methane molecules reach the mesosphere - creating, or reinforcing existing noctilucent clouds.

They are the highest clouds in Earth's atmosphere, located in the mesosphere at altitudes of around 76 to 85 km (47 to 53 mi). They are too faint to be seen in daylight, and are visible only when illuminated by sunlight from below the horizon while the lower layers of the atmosphere are in Earth's shadow

In an absolute sense they are rare, and the very restricted observation conditions make seeing them far rarer still; this was a first for me. (As an aside, it doesn't hurt my Captain credibility when the FO asks a question he expects to be a stumper, and I just happened to have the correct answer right there. The big question is how it is that I was able to, within three-quarters of a second, use tenuous visual information to retrieve a term I had read at least a half dozen years prior. Humans do this all the time; it is extremely difficult to imagine AI ever managing it.)

Unfortunately, the camera in my now ancient iPhone 5S doesn't really do the scene justice -- there were patterns and structure that disappear in the noise.

Also worth noting is that this picture clearly shows a very sharp boundary between between the Troposphere and the Stratosphere, and, in so doing, also reveals the Earth's curvature. 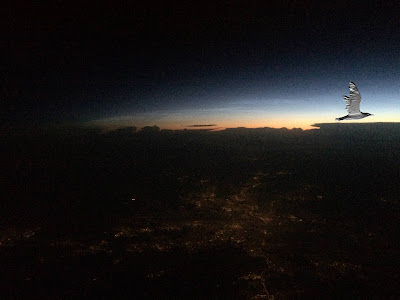 More of the noctilucent clouds, with Stockholm in the foreground.

You have no idea how much I had to pay that damn seagull to bomb my photo.

Photobombed by a Seagull

Here I was, just trying to take a nice sunset picture for your enjoyment and I see I was photobombed! 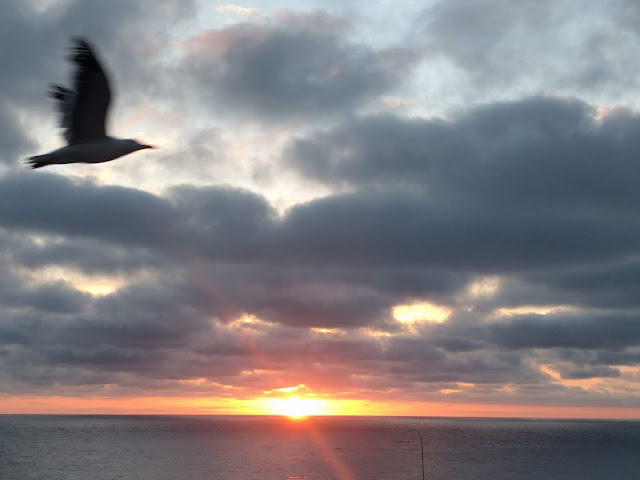 Damn, I must be transforming into a Leftist! Now I agree with something Noam Chomsky said regarding Russia interfering in the 2016 (and other) elections!


It’s a pretty remarkable fact that—first of all, it is a joke. Half the world is cracking up in laughter. The United States doesn’t just interfere in elections. It overthrows governments it doesn’t like, institutes military dictatorships. Simply in the case of Russia alone—it’s the least of it—the U.S. government, under Clinton, intervened quite blatantly and openly, then tried to conceal it, to get their man Yeltsin in, in all sorts of ways. So, this, as I say, it’s considered—it’s turning the United States, again, into a laughingstock in the world.

I still personally dislike Chomsky since I think he personally set natural language processing and semantic analysis back decades, but in this case I think he's right.
Posted by Bret at 7/19/2018 12:17:00 PM 3 comments:

"Democracy demands that we're able also to get inside the reality of people who are different than us so we can understand their point of view. Maybe we can change their minds, maybe they'll change ours. You can't do this if you just out of hand disregard what your opponent has to say from the start. And you can't do it if you insist that those who aren't like you because they are white or they are male, somehow there is no way they can understand what I'm feeling, that somehow they lack standing to speak on certain matters." Barack Obama, July 2018
Posted by Bret at 7/18/2018 04:48:00 PM 3 comments: