What The Heck Is That?

Consider the gizmo in my hand below. It's called a vortex tube and is around 4 inches long and weighs maybe half a pound. I had never heard of these until recently. Had you? 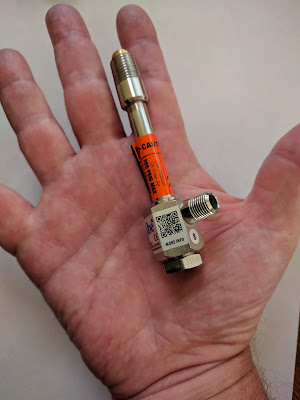 There are no moving parts. You connect the inlet near my thumb to an ambient (room) temperature air supply. Really, really hot air comes out the end near my forefinger. Really, really cold air comes out the other end near the base of my palm. That little orange label says "CAUTION: Hot and cold surfaces" and it's not kidding. If the air supply is 8 cubic feet per minute at 100 psi, the hot end is over 100F hotter than the input air temperature and the cold end is over 100F colder than the input air temperature and can provide over 500 BTUs of cooling.

That's a pretty neat trick for something with no moving parts. Another neat trick is that until recently folks were still debating the physics behind how it works:

...for a long time the empirical studies made the vortex tube effect appear enigmatic and its explanation – a matter of debate.

In fact, the science wasn't totally settled until 2012:


This equation was published in 2012; it explains the fundamental operating principle of vortex tubes. The search for this explanation began in 1933 when the vortex tube was discovered and continued for more than 80 years.

So I don't feel bad that I'd never heard of it and had no idea how it worked. And I'll admit when I read the explanation that I still only have a vague notion of how it works.

Why did I discover it now? We have robotic machines that work in agricultural environments. Those machines have computers. We use computers and systems that can withstand up to about 105 (Fahrenheit). 99.8% of the time, the ambient temperature is below that. Unfortunately, 0.2% of the time, it gets hotter than that but the crops still need to be tended to and the machines fail and even die if they're run at a temperature hotter than 105. Yet for 0.2% of the time, it's expensive, bulky, and makes the system less robust due to complexity to add cooling via air conditioning to every single computer cabinet.

On the other hand, putting a vortex tube in each system isn't expensive, bulky, or complex. On those days when it's really hot, the grower can just attach an air supply from a compressor to the vortex tube and voila!, they can run our systems even when it's ridiculously hot. Most growers have compressors available, but even if they don't, it's straightforward to rent one on short notice. Problem solved!
Posted by Bret at 9/15/2017 03:16:00 PM 8 comments:

Now that Irma (and Harvey before her) have dissipated, we're back to what I lovingly and jokingly call "ho-hum sun in a clear blue sky sinking into the ocean sort of sunsets." 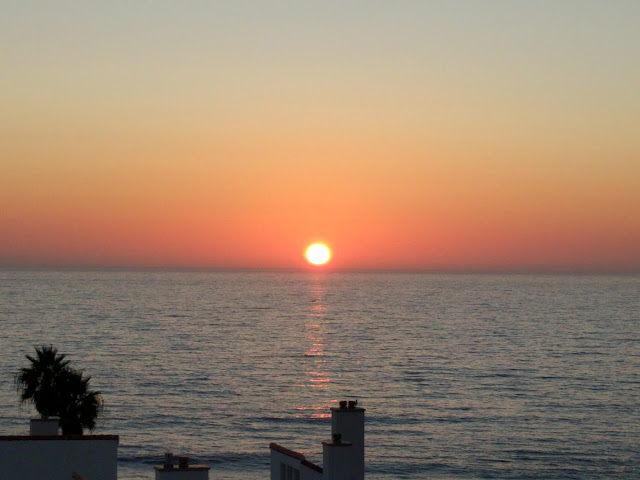 They're beautiful, for sure, but not the knock-your-socks-off jaw-dropping sunsets that we had during the hurricanes.

Hurricanes are natural disasters and I certainly don't wish there are more of them. But my experience is that every time there are big powerful hurricanes, especially in the Gulf, we have the best sunsets in San Diego: 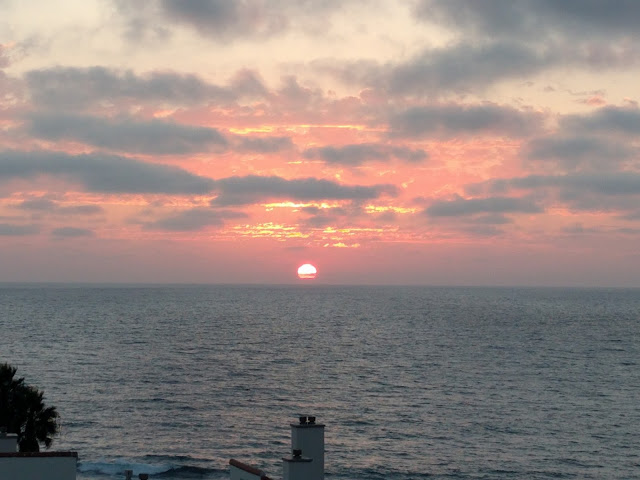 Usually our sunsets, especially in fall, are just ho-hum sun in a clear blue sky sinking into the ocean sort of sunsets. It's not bad, of course, but nothing like the sunsets above (taken from my upper deck) with fast moving low violet-grey clouds zipping past a brilliant yellow, orange and red high cloud 180-degree background panorama (my phone camera just doesn't come close to doing it justice).

Email ThisBlogThis!Share to TwitterShare to FacebookShare to Pinterest
Labels: sunsets

If you were a tiny secretive country, with a wrecked economy run by semi-slaves, and no influence whatsoever beyond your disputed south borders with your far richer nemesis, how would you keep up with the mighty pressure of the most powerful country (and military) the world has ever seen?

Well, you buy insurance, and a nuclear one at that. Kim Jon-un, though relatively young, witnessed in his lifetime what happened to Iraq, Libya and Syria after they gave up their nuclear ambitions. So, contrary to the assumptions in part of the media (‘crazy fat boy’) covering the North Korea imbroglio, Mr. Kim is acting, up to now, as a very rational player.

China, confronted by Mr. Trump to provide a solution on North Korea (NK) - i.e. going against a State it sees as a buffer and ally - while at the same time being challenged over its South China Sea expansionism by the USA, is also acting as a rational player, and doing not much beyond theatrical concessions.

The USA, apparently, is the only country ignoring basic game theory and asking for denuclearization of North Korea as a pre-condition to any further talks, which the chance of happening is the same as hell freezing over.

From the point of view of Mr. Kim, the most pressing objective is to maximize its insurance policy. Not only against the USA and South Korea (SK), but also from any possible betray by China.

In this context, I offer the speculative idea that Kim’s ballistic display of force is not only a theater for foreign and internal observers, but also a ruse.

Kim knows that, when push comes to shove, his atomic arsenal means the chances of a powerful nuclear attack wiping NK out of the map is, now, much higher. The fact that his conventional force is also a great threat to South Korea, given the proximity of Seoul to the border, only adds to the chance of an overwhelming attack, of Fire and Fury, being mandatory if any escalation ever happens.

What’s a small dog going to do in such a big league fight?

Kim knows that every surveillance satellite, stealth wing (drone or airplane) and spy is mapping out the main sites to be nullified in the event of war. I don’t think he hopes to ever deliver any ICBM he may have, as well as a good deal of his conventional arsenal.

So Mr. Kim, if a rational player, can only expect his insurance to hold if he can assuredly deliver a blow even if he is killed by bombs or a China backed coup, and if his weapons and territory are neutered. And that asks for more cunning strategies.

I place at a high probability that, by now, Kim may have smuggled, by land or sea, a few of his former weaker bombs (in the range of 5-10 kilotons) to hideouts in South Korea, a task far easier than building reliable ICBMs. That, and a few elite agents with trucks, is all he needs to make the threat of nuclear retaliation credible, even after his complete defeat.

A surface detonation of a couple of 10kt bombs, in the middle of Seoul, may instantly claim 100.000 lives, possibly 2 or 3 times that after a few days, and economic devastation of a very rich metropolis.

There is nothing new in such strategy, as the nuclear-armed B-52 continual flights the US kept up in the 60’s (in order to assure mutual destruction to the USSR before better ICBMs were in place) tell us. The difference being that, in the Koren case with contiguous borders, it makes all the sense NK should have nukes implanted inside SK.

Maybe a few of those showy missile tests were aimed at covering for a submarine/ship landing in a far away and lonely shore of SK, with a precious load to deliver to a small truck driving out of the shadows.
Posted by Clovis at 9/06/2017 08:44:00 PM 3 comments:

Martyr in the Making

Joey Gibson is the founder of Patriot Prayer:


Patriot Prayer is an American right-wing advocacy group, whose stated aim is to support free speech and the First Amendment of the U.S. Constitution. The group is known for organizing rallies and protests in predominantly liberal areas. Some of the rallies have drawn controversy due to the attendance of white nationalists, though the group's founder Joey Gibson, a Japanese-American, has disavowed them and denounced racism. [...]

The Southern Poverty Law Center does not list Patriot Prayer as a hate group, nor does it regard Gibson as an extremist;


He also seems to want to be a martyr. Via the Weekly Standard, his story is told, including a recent beating. The following is a video of that beating where he and two associates are peacefully standing, unarmed, with arms in the air in gestures of submission and surrender. They say nothing at all (or at least nothing that could possibly be heard). They are nonetheless mercilessly attacked by the crowd and Joey is hospitalized from the resulting injuries.

His primary motivation seems to be to make Antifa look bad. Watching this video, he certainly succeeded in my eyes. While we don't see what happened directly before the video started, it certainly looks like a mob attacked three peaceful men without any sort of provocation other than their mere existence.

I find the video sickening to watch. To me, the attacking crowd makes humanity look really bad. Those not actually physically attacking the three men are egging the attackers on. Nobody seems to even entertain the thought that attacking peaceful unarmed people in a public park is wrong. Nobody even thinks to intervene in any way.

Even police allow criminals to surrender by holding their hands over their heads. Even armies in war allow the surrender of the enemy. The behavior on the video is pre-civilizational, the behavior of barbarians. Oh sure, I get that mob violence happens and this is just one instance. But what makes it different to me is that there was no incitement: no weapons, no violence, no speech, no nothing.

Joey is never violent and that fact is well known. His colleague "says Joey never, ever fights back." What non-violent person would repeatedly put himself in a position where he'll be beaten and probably eventually killed? One who wishes to be a martyr. When asked what the objective at the park was, Joey responded.

If so, I think he needs to run his life a little differently.