I like living in California and I hope to continue to be able to live in California. However, if taxes are raised enough, I will feel compelled to leave for a lower tax jurisdiction in order to better provide for my family.

California is having some serious problems governing itself. As Megan McArdle wrote:

California is completely, totally, irreparably hosed. ... You can blame Republicans who won't pass a budget, or Democrats who spend every single cent of tax money .... You can blame the initiative process, and the uneducated voters who try to vote themselves rich by picking their own pockets. Whoever is to blame, the state was bound to go broke one day, and hey, today's that day!

We had a bunch of ballot initiatives to vote on yesterday, and while I got held up and didn't make it to the polls before they closed, I would've voted with the "uneducated" majority against tax increases had I been more timely. To vote for tax increases would mean that I'd be more likely to have to move so it would seem rather pointless to me.

I feel that the voters should set the budget and then the governator and legislature should figure out how to operate within that budget. They should choose which jobs and services to cut and they should get started now. Far fewer teachers, police, firemen, bureaucrats, etc. That I'm willing to live without.
Posted by Bret at 5/20/2009 09:41:00 AM 6 comments:

Common sense would be wrong.

Which, of course, makes no sense since it's random.

Too Big to Fail

Being too big to fail, if true, couples a concentration of power (bigness) with a corruption of the free market ideal. The same concentration of power seems to inherently lead to other corruption as well. Mancur Olson's research and thought regarding the nature of special interests groups makes it seem inevitable to me that mega-corporations, especially in slow changing industries, will (continue to) form symbiotic relationships with the State that further strengthens both the mega-corporation and the State, to the detriment of the rest of the citizenry. We're seeing exactly that with GM, Chrysler, Steel protectionism, banks, etc., etc., etc.

So, given this seemingly inevitable sequence away from an ideal free market economy and towards Corporatism, exacerbated by the existence of huge business, is there anything that can be done to slow it down?

I think that reducing the number and size of large corporations would be helpful. However, giving the Federal government the directive to do such a thing by fiat would be a cure far worse than the disease. The method of reducing the number of large corporations, in order to avoid even more corruption and waste, would have to be formulaic and not subject to the whims of the President, Congress or regulatory agency bureaucrats.

The devil's in the details, but I'm imagining there might be a way to tax bigness such that the shareholders of large corporations would split the corporations into smaller entities, unless the bigness really was so advantageous, because of some manufacturing efficiencies or something like that, as to outweigh the increased tax burden.

I've been pretty disappointed with Cafe Hayek because the bloggers and commenters there purposely ignore both the real world considerations of government and the fact that the vast majority of the people in the United States are not even vaguely interested in Libertarian ideals. Part of my disappointment is that, for at least a while, I fancied myself as "Libertarian leaning", but they've convinced me (and not politely either) that I'm nothing of the sort.

Conveniently, the following excerpts from Libertarian Democraphobia relieve me of the effort of having to describe in my own words what I think are some of the fundamental problems of Libertarianism:

The libertarian non-coercion principle is a good abstract first approximation of the liberal presupposition that persons are free and equal. No one has a natural right to rule over another, and no one has a natural duty to obey. The liberal presupposition sets a high bar for the justification of coercion, and thus the justification of the state. Many libertarians think there is no justification. Therefore the only acceptable rule of collective choice is unanimity or full consensus. This is one focus of the debate between anarchist and limited-statist libertarians. On the anarchist side, political power cannot get off the ground, and thus the design of mechanisms to control political power is a non-issue. On the limited-statist side, political power does get off the ground, and thus so does the design of constitutions and democratic institutions. [...]

In any case, libertarians often display a confusing or confused reaction to democracy as it actually exists. The scheme laid out in most libertarian ideal theory is so distant from actual democratic practice that the whole existing system can seem by comparison a comprehensive injustice. When one’s ideal theory implies that politics is by its nature illegitimate and corrupt, one tends to develop a sharply disapproving attitude toward participation in politics. Lots of libertarians, for example, think it’s morally wrong to vote. (There are many structural reasons the Libertarian Party is hopeless, but here’s one reason libertarians tend to be at best half-hearted political activists.) Likewise, incrementalist approaches to policy can never be adequately pure from the perspective of radical libertarian ideal theory. School vouchers are still tax-financed; a system of mandatory personal retirement accounts has a restriction on economic liberty at its heart; and so on. So, not only is politics corrupt and corrupting. There are few democratically feasible libertarian policies that merit support. The public does not want libertarianism. Which means that the public does not want a system that respects fundamental rights. So much the worse for the public, the thinking tends to go. [...]

If libertarians are going to shift the politics of the countries we live in, we’ve got to get it through our thick skulls that many people have considered libertarian ideas and have rejected them for all sorts of decent reasons. We’ve got to take those reasons, and those people, fully seriously and adequately address them. Otherwise, we should probably just accept that libertarianism is a niche creed for weird people and reconcile ourselves to impotent, self-righteous grousing.

The irony is that The Fatal Conceit by Hayek is proudly displayed on their website, and the fundamental concept of The Fatal Conceit is that sweeping away all of society's institutions in order to remake society according to better principles is a really, really bad idea, yet this is exactly what the Cafe Hayek bloggers would do in an instant if given the chance.
Posted by Bret at 5/07/2009 09:43:00 AM 21 comments:

Jon Stewart admitted to Cliff May that he was willing to consider Harry Truman a war criminal for giving the order to drop the atomic bomb on Japan. There were a number of revisionist books on this matter many years ago. In doing the homework on the matter it became clear how nonsensical the revisionist notion was on this matter. It requires real historical ignorance and denial of the nature of the moral choice confronted by Truman to fault him.

The video of Bill Whittle fisking of Jon Stewart is extremely well done. Also, a guest blogger at Bookworm Room has a meaningful contribution.

I've never been particularly enthralled by the concept of "sustainability". It seems too static and too pessimistic. It seems to imply we're going to get the world to a certain state, and keep it that way forever, and that's the best we can do. Sometimes you hear the phrase "sustainable growth", but it sounds a bit oxymoronic - either something's sustaining or it's growing, but not both.

Along those lines I noticed an intriguing blurb in Foreign Policy (HT: Virginia Postrel). Here's an excerpt:

Sustainability is inherently static. It presumes thereâ€™s a point at which we can maintain ourselves and the world, and once we find the right combination of behavior and technology that allows us some measure of stability, we have to stay there. A sustainable world can avoid imminent disaster, but it will remain on the precipice until the next shock.

Resilience, conversely, accepts that change is inevitable and in many cases out of our hands, focusing instead on the need to be able to withstand the unexpected. Greed, accident, or malice may have harmful results, but, barring something truly apocalyptic, a resilient system can absorb such results without its overall health being threatened.[...]

The rest of the article talks about attributes of a resilient system. It's a little short on examples and details, but I like the general concept.
Posted by Bret at 5/04/2009 01:37:00 PM 9 comments:

I Think Hayek Would Agree

The Road to Serfdom is best enjoyed in a Chrysler! Or a GM product.

Instapundit wrote about "GOING GALT" on your next car purchase.

There is pretty much no way I'll buy a GM car at this point, even if (or perhaps especially because) Obama is guaranteeing the warranty. I'm certainly not willing to support unprofitable and now essentially socialistic companies. And now that the unions basically own the company, I'd like to see the value go to zero.

However, this makes it a sad moment for me. I've always dreamed of owning a new Corvette and now the dream is gone. It obviously wasn't a very strong dream since I could've afforded one if I really, really wanted, but the two seat limitation of the car has made it impractical. In fact, it was probably one of those dreams I would've never acted on, but the dream itself was enjoyable.

On the other hand, I suppose that owning the Tesla Roadster wouldn't be a bad alternative dream... 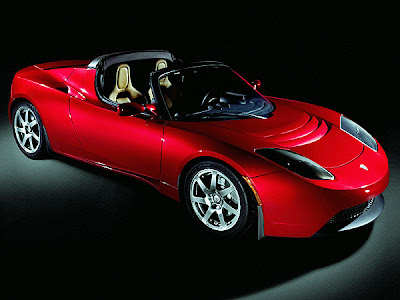