I'm told that as far as the economy goes, 1999 was a good year. I agree. Real GDP growth over 4 percent, unemployment below 5 percent, median income showing solid growth, and numerous other excellent statistics.

Capital investment is one of the reasons a modern advanced economy produces as much as it does. In general, if the level of investment increases, so does the amount produced. However, there is a delay between when a dollar is invested and when returns on that investment, if any, can be expected.

For some investments, returns occur almost immediately and last a long time but are relatively small. For example, if you own a laudramat, the time between when you invest in a new dryer and when it starts generating revenue might be as little as a few days. The revenue likely exceeds operating costs (or you probably wouldn't have bought it in the first place), and the dryer will provide a small return for many years.

Other investments take a long time to begin producing a return. Examples include pharmaceutical development and developing oil fields. These sorts of investments can take the better part of a decade or more before the first revenue begins to trickle in, and many years more before the peak return occurs.

The economic output at any given time due to investment includes returns from recent investments like the dryer at the laudramat, and investments from the more distant past, for example investments in oil fields. The output of the economy at a given time is dependent on prior investments from a wide range of time - from very recent to decades old. 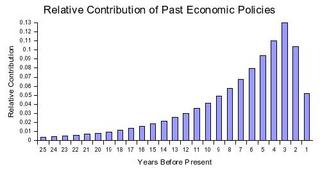 I imagine that the peak year of the economic policy contribution is around two to three years back and then the contribution is smaller and smaller the farther back you go.

It depends though. Some economic policies, mostly bad ones, can have an effect very quickly. Monetary policy that is significantly too loose or too tight is one example. A significant increase in capital gains taxes is another. It's simply much easier to destroy than to create.

Nonetheless, a significant part of the credit or blame for how the economy is doing belongs to past presidents as well as the present one. The credit for the economy in 1999 belongs to not only Clinton but also Reagan. The economy is excellent right now and is the accumulated economic legacy of Reagan, Clinton, and George W. Bush.
Posted by Bret at 12/05/2005 08:41:00 PM