And in Other Sports News...

The National Ultimate Frisbee Finals were held in San Diego last Sunday and an a capella quartet I was in sang the national anthems of the United States and Canada at the beginning of it. I've always wondered where they get the random people to sing the anthems at these sporting events and now I know - it's people like me! There's no recording (alas!) but here's a picture of us intrepid singers (it was windy - that's why it looks like I'm having a bad hair day): 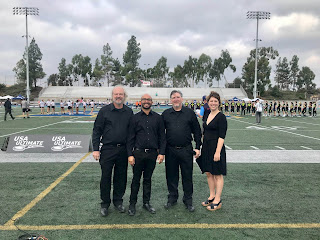 The men's finals was really exciting. The Seattle Sockeyes won 13-12 in sudden death overtime against the Chicago Machine. The Sockeyes were up 11-6. Then the Machine scored 5 in a row to tie it up, then it was tied again at 12-12 with the next goal deciding the game. Both teams went all out for the last point for an exciting finale!

I used to enthusiastically play Ultimate so it was really fun to watch the sport. I think it's unfortunate that the sport hasn't really ever caught on at the professional level because it's really an exciting spectator sport.

Email ThisBlogThis!Share to TwitterShare to FacebookShare to Pinterest
Labels: sports

At your age, you should be thankful you still have bad hair days.

Watta ya mean at his age? He's just a kid.

I've been out of the game for 65 years and counting, but from observing the younger generations, I've noticed things haven't changed much. My granddaughter, a college senior, met her guy at Oxford doing a year abroad program and it turns out he is a student at her college, but never met him there.

Doing something you like will put you in touch with like-minded others -- friends and relatives are good sources too. Volunteers are very much needed, especially those with your remarkable skills in science and music.

Don't give up. Lots of our friends have lost their partners and are alone. I don't wish it on you.

BTW - I think one of our former buddies at GG had a favorite saying. Paraphrasing here: "Don't throw away the good while looking for the perfect."

Give some of the too young or too old girls* who have other likeable qualities a chance and if it doesn't work out, they might have friends.

*I refer to everyone under 75 boys or girls.